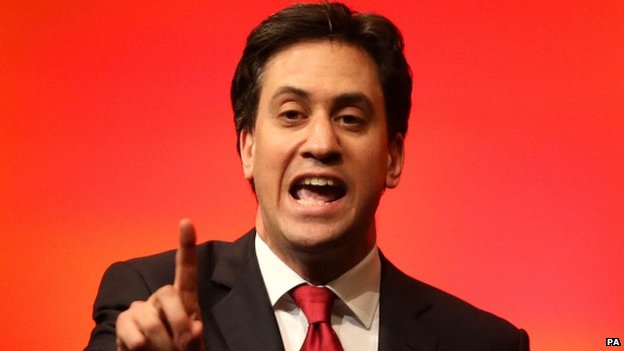 Labour is determined to ban the “worst abuses of the system”, Ed Miliband will say

Ed Miliband will detail plans to tackle the “epidemic” of zero-hours contracts in a speech in Scotland later.

The Labour leader will say workers with irregular shifts and pay should have rights, including a contract with fixed hours, if they work regularly for the same employer for a year.

Tackling the issue would be “harder” in an independent Scotland, he will say.

The Tories said the number of zero-hours contracts went up under Labour and they did nothing about it.

A government spokesman said it was analysing research on zero-hours contracts and would “respond in due course”.

Zero-hours contracts allow employers to hire staff with no guarantee of work, only paying them for whatever hours they work.

Speaking in Motherwell after a shadow cabinet meeting in Glasgow, Mr Miliband will say: “Zero-hour contracts have spread like an epidemic across our economy.

“The government’s own figures say they have increased three-fold since 2010 and some estimates suggest there are one million people on these contracts across the UK including at least 90,000 here in Scotland.”

He will say the contracts can offer “short-term flexibility for employers and employees” but that most employers don’t use them because they are “incompatible with building a loyal, skilled and productive workforce”.

He will add that Labour is determined to ban the “worst abuses of the system”.

“It has left too many people not knowing how they will make ends meet from one week to the next, and unable to plan for the future,” he will say.

Under Labour’s plans, workers on zero-hours contracts would:

Mr Miliband will say this can “only be done across the UK”, adding: “If Scotland left the UK it would be harder to end the abuse of zero-hours contracts either here or in what is left of the UK.”

Labour asked Norman Pickavance, former HR director at supermarket chain Morrisons, to carry out a review into zero-hours contracts, and these plans are based on his recommendations.

“One man’s flexibility is another’s insecurity”, he said, claiming some workers were “scared out of their wits”.

But James Sproule, chief economist for the Institute of Directors, said “flexibility” in the labour market was helping the economy to recover.

“Zero-hours contracts are one small part of a much broader flexible labour market”, he said.

A spokesman for the Department for Business, Innovation and Skills said zero-hours contracts could offer “welcome flexibility” and the government would not “ban them outright”, but there had been “evidence of abuse”.

And Business Minister Matthew Hancock said: “We want to strike the right balance between flexibility for the businesses who create jobs and making sure there’s adequate protection for employees. That’s why we are carrying out a review into zero hours contracts.”

A spokeswoman for Scotland’s Enterprise Minister Fergus Ewing said the Scottish government had already acted on zero-hours contracts within its “limited powers”.

She said Scotland was currently “waiting for Westminster action”, but independence would allow a Scottish government to consider “issues such as zero-hours contracts” and “improve employment opportunities”.