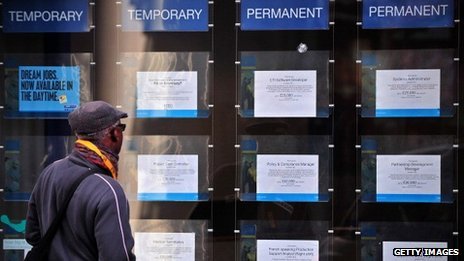 The unemployment rate was 6% in the three months to October

Wage growth in the UK is picking up, figures from the Office for National Statistics (ONS) indicate.

It is the first time for six years that both measures of earnings growth have been above the inflation rate.

Meanwhile, the number of people unemployed in the quarter fell by 63,000 to 1.96 million.

The fall was the slowest quarterly fall for a year, leading some analysts to speculate that the rate of improvement may have peaked.

The jobless rate was 6%, matching its lowest level in six years.

The ONS figures also showed that there were 30.80 million people in work in the three-month period, 115,000 more than for the May-to-July period, driven by more people in full-time work.

For the month of October alone, pay including bonuses, increased by 1.8%. That compares to an inflation rate of 1.3% in the same month.

November’s inflation figures were released on Tuesday and showed it falling further – to a 12-year-low of 1%.

Bank of England policymakers expect that trend to continue.

Earlier on BBC Radio 5 live, the Bank of England’s deputy governor, Jon Cunliffe, said UK inflation in the coming months was “going to be low”.

Analysts were encouraged by the earnings growth.

“This bodes well for consumer spending in 2015, although it needs to be borne in mind that consumers have faced a prolonged squeeze on their purchasing power.

“Meanwhile, the labour market is still seeing decent improvement, although the underlying rate of improvement is showing signs of moderation,” he added.

However, TUC general secretary Frances O’Grady said the figures showed “some long overdue improvements, but at this rate it will take over a decade to recover the real value of people’s earnings”.