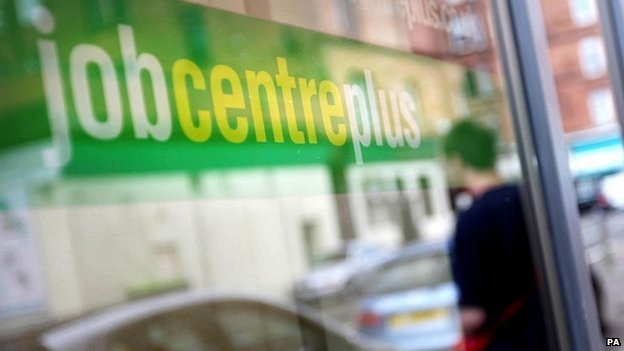 The UK jobs market continued to improve in the three months to April, although the rate of wage increases slowed sharply, official figures show.

But the quarterly rate of earnings growth, including bonuses, slowed to 0.7% from 1.9% the previous month.

This was largely due to delayed bonus payments, the Office for National Statistics (ONS) said. Excluding bonuses, pay rose by 0.9%.

The total number of people out of work is now at its lowest level for more than five years, with youth unemployment, which covers 16-24 year olds, standing at 853,000.

The number of people claiming Jobseeker’s Allowance in May fell by 27,400 to 1.09 million, the ONS said.

The continuing improvement in the jobs market in the three months to April was due mainly to jobs created in the private sector.

There were 5.4 million people employed in the public sector and 25.1 million in the private sector, up 447,000 on the previous three-month period.

“The rise in employment this month is concentrated in full-time employees, not self-employment, which in the past has been used to ‘talk down’ the strength of the rise,” said David Tinsley at BNP Paribas.

“Indeed, there was a sharp fall in the proportion of people working part-time who say they are doing so because they can’t find a full-time job, which is one of the Bank of England’s favourite metrics of disguised slack.”

“Labour market strength is the driving force behind calls for interest rate increases from the Bank of England, sooner rather than later, and today’s figures will add fuel to their fire,” said Jeremy Cook, chief economist at World First.

“However, wage growth has fallen to 0.7%, versus an expected 1.2%, and this is still a major cause for concern. As a result I am still expecting the Bank to hold policy right through into the second quarter of 2015, mainly courtesy of the lack of real wage increases.”

The inflation rate in the UK currently stands at 1.8%, meaning wages are increasing at a slower rate than prices.

“But it should not be long until we see earnings growth accelerate as the labour market continues to tighten. Pay growth should pick up in coming months, perhaps significantly.”

The figures for unemployment in the three months to April are based on the Labour Force Survey, in which the ONS speaks to 60,000 households once a quarter, making it the country’s biggest household survey.