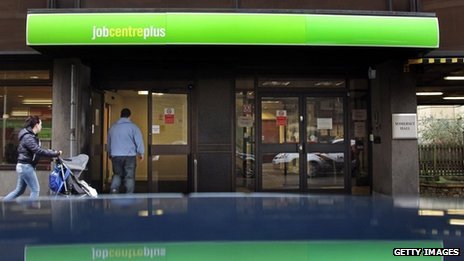 Unemployment has been falling for 12 months in a row

The number of people out of work in the UK has fallen by 77,000 to a five-year low of 2.24m in the three months to February, official figures indicate.

The unemployment rate now stands at 6.9% of the adult working population, the Office for National Statistics (ONS) said.

Average earnings in the three months to February grew 1.7% compared with a year earlier.

It comes as inflation was recorded to have fallen to 1.6% in March.

It is the first time since the spring of 2010 that the increase in average wages has exceeded the Consumer Price Index (CPI) measure of inflation.

It is also the first time since the recession that unemployment has fallen below 7%.

At just over 30 million, the number of people in work remained at its highest level in a generation.

The number of people claiming Jobseeker’s Allowance fell by 30,400 to 1.14 million in March.

There were 1.42 million people working part-time because they cannot find full-time work, a fall of 17,000 over the quarter, but 10,000 higher than a year ago.

Joe Grice, chief economic adviser at the ONS, said: “These figures – rising employment and falling unemployment and inactivity – continue the strong trend in the labour market that has been seen in recent months. Self-employment has again been a prominent growth area.”

The last time unemployment stood at 2.2 million was at the height of the financial crisis in June 2009. At that time, it meant unemployment had hit a 13-year high.

Chief Secretary to the Treasury Danny Alexander said: “These figures are some of the strongest evidence yet that we are embedding the recovery. We have record numbers in work and unemployment falling at the fastest rate in over a decade.

“With earnings now rising in line with prices and employment rising, these figures reinforce the fact that the only way to higher living standards is to take the difficult decisions needed to deliver our long-term economic plan.

“There is still a great deal more to do, but today’s announcement is solid progress on building the stronger economy in a fairer society that Liberal Democrats entered coalition to deliver.”

At 6.9%, the unemployment rate has fallen below the threshold at which the Bank of England said last August it would consider raising interest rates under its policy of forward guidance.

But economists suggested it was still too soon to see any upward movement from the current historic low rate of 0.5%.

Howard Archer, chief UK and European economist at IHS Global Insight said it remained “more likely than not” that the Bank’s Monetary Policy Committee (MPC) would hold off taking any decision on interest rates until 2015.

He added: “Not only has the Bank of England repeatedly stressed that an unemployment rate of 7% is not a trigger for an automatic interest rate hike, but it modified its forward guidance policy in February to focus on the amount of slack it considers to be in the economy, based on a broad range of indicators.

“The Bank of England will likely regard the fact that there are 1.421 million people who are working part-time because they cannot find a full-time job as evidence that there is still substantial slack in the labour market.”

David Kern, chief economist at the British Chambers of Commerce, said the latest ONS figures demonstrated the resilience and flexibility of the UK labour market.

But he added: “Concerns do persist, however. The youth unemployment rate is still much too high at 19.1% and, while long-term unemployment is falling, more than 800,000 people have been unemployed for more than a year.

“These concerns aside, it is clear that the recovery is on the right track. To consolidate this, it is important that we see measures to increase productivity and firmer action on youth and long-term unemployment.

“Improved access to finance, incentives to recruit apprentices, and support for export and investment will go some way to achieving this.”