The unemployment rate now stands at 5.7% of the adult working population, the Office for National Statistics (ONS) said.

The ONS said the employment rate, or level of people in work, was 73.2%, its joint highest rate.

Average earnings including bonuses were up 2.1% in the quarter compared with a year earlier.

CPI inflation was 0.5% in December, and new data released on Tuesday showed the rate fell to 0.3% in January, its lowest level since records began.

James Sproule, chief economist at the Institute of Directors (IoD), said wages would continue to rise as competition for talent intensified. “Two-thirds of IoD members [are] planning pay rises at least in line with inflation over the coming months,” he added. 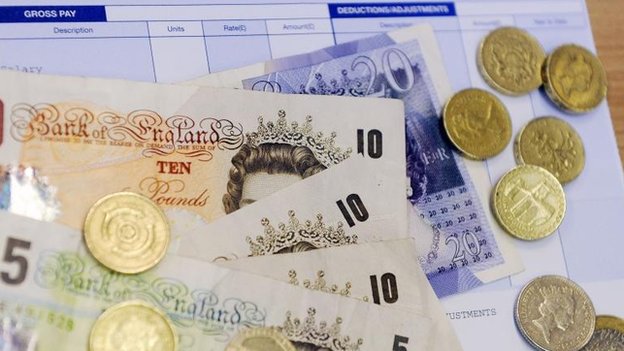 Pay has continued to rise faster than inflation

However, for the October to December period the unemployment rate for 16 to 24-year-olds was 16.2%, which was unchanged on the previous quarter.

David Kern, chief economist at the British Chambers of Commerce, said the failure of youth unemployment to fall further was a concern: “It is consistently higher than the adult employment rate, so we need to look at ways to bring this down further.”

The strong labour market and pay figures boosted the value of the pound against other currencies.

The pound was also lifted by the latest minutes from the Bank of England’s Monetary Policy Committee (MPC), which showed signs of divisions between the Bank’s policymakers.

Although all nine members of the MPC voted to keep interest rates at 0.5%, two members said the decision was “finely balanced”, adding: “Given the outlook for inflation beyond the short term, there could well be a case for an increase in Bank Rate later in the year.”

The two members were not named, but Ian McCafferty and Martin Weale both voted for rate rises on several occasions last year.

However, the minutes also said that for another MPC member, “the next change in the stance of monetary policy was roughly as likely to be a loosening as a tightening”.

Of the regions, the unemployment rate was highest in Wales at 6.7%, with Northern Ireland on 5.7% and Scotland at 5.4% – lower than the national rate.

Work and Pensions Secretary Iain Duncan Smith said: “The jobs-led recovery is changing people’s lives for the better on a daily basis.”

Labour’s shadow employment minister Stephen Timms said the fall in overall unemployment was welcome, “but five years of the Tories’ failing plan has left working people £1,600 a year worse off since 2010”.

David Cameron: “Britain in the last four years has created more jobs than the rest of Europe put together”