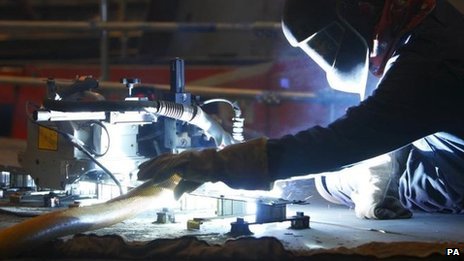 The manufacturing sector remains 8.2% smaller than it was in early 2008

UK manufacturing output grew by 1% in February from January, the Office for National Statistics (ONS) has said.

The rise – driven by pharmaceuticals, transport equipment, food, beverages and tobacco, – was the biggest since September, and ahead of forecasts.

Industrial output, which includes power generation and North Sea oil production as well as manufacturing, climbed 0.9% on the month.

The figure bounced back after a weak January, when bad weather hampered North Sea oil and gas output.

Compared with a year previously, industrial output was up 2.7%.

The ONS also said that in the quarter to the end of February – generally considered a better guide to recent trends – manufacturing and industrial production were both up 0.8% on the previous three months.

“Manufacturing output headed higher, buoyed by a strong pick up in the pharmaceuticals, transport and food sectors,” said Lee Hopley, chief economist at the EEF, the manufacturers’ organisation.

“Output now stands at its highest level in more than two and a half years with companies reporting good trading conditions both at home and in overseas markets.

“All manufacturing indicators are lining up for a strong first quarter growth rate, highlighting that industry remains a vital cog in the UK’s continuing recovery.”

Last month, Chancellor George Osborne announced measures to help manufacturers as part of his aim to try to “rebalance” the UK economy.

A survey by the British Chambers of Commerce (BCC), released earlier on Tuesday, showed six key manufacturing balances, including investment plans, were at all-time highs.

And, commenting on the manufacturing and production figures for February 2014, BCC chief economist, David Kern, said it was “important to reinforce efforts to broaden the recovery towards investment and exports”.

“At the same time, the government must continue its efforts to boost access to finance for growing firms,” he added.

Mr Kern also said that while the share of manufacturing in the UK economy remained “relatively modest” it was “hugely important” to the recovery.

The manufacturing sector remains 8.2% smaller than it was in early 2008