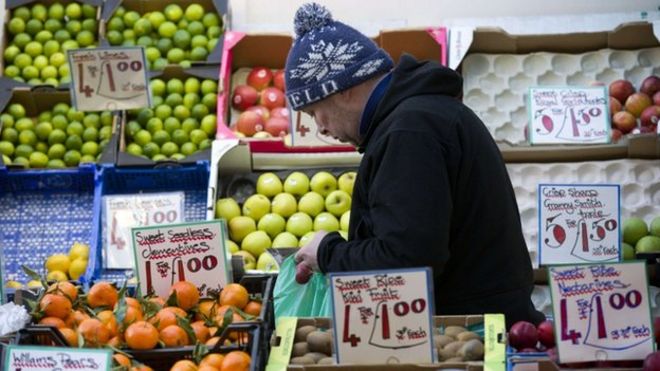 Lower prices for food and computer goods helped to cut the rate from 0.3% in January, official figures show.

February’s figure is the lowest rate of Consumer Prices Index (CPI) inflation since estimates of the measure began in 1988.

The drop in the CPI measure was sharper than many analysts had expected, with most expecting a rate of 0.1%.

“It looks likely the rate will drop below zero at some point in the coming months, and hover around zero for most of the year,” he said.

For now at least, the fall in the price of food, games, petrol and energy, if it persists for a few months, is good news for most of us – because it increases our spending power and our pounds go further.

In other words we feel and are a bit richer.

But if stagnation in prices were to go on for longer, if it were to turn into fully fledged deflation, that would be worrying.

The point is that if we thought that the price of things we don’t normally have to buy at any particular moment – household goods like washing machines for example, or motor cars – was on a firmly downward path, we would probably defer purchases of those things, and that would depress economic activity.

“We remain convinced that there is very little risk of a long period of deflation,” said David Kern, BCC chief economist.

“Inflation in the service sector, which accounts for 80% of the UK economy, remains firmly above the government’s 2% target, and core CPI inflation in February was 1.2%.

“Together with higher earnings, lower inflation is boosting people’s spending power, and will contribute to economic growth in the year ahead,” he said.

Rain Newton-Smith, director of economics at business lobby group the CBI, said: “Despite inflation dropping to zero, it is unlikely we will see falling prices for a prolonged period, particularly as the pressure from lower oil prices fades.”

However, she added: “With the Monetary Policy Committee still alert to the risk of very low inflation becoming entrenched, a rise in interest rates anytime soon seems off the cards.”

Last week, the Bank of England’s chief economist Andy Haldane said rates were as likely to need cutting as raising in the immediate future.

In February, the Bank said that inflation could turn negative temporarily in the spring because of falling oil prices.

Cuts in energy bills are among the factors likely to push inflation lower in March, according to economists.

But unlike in the eurozone, where prices are already showing annual falls, many economists think UK consumer demand will remain steady in the face of falling prices, due to robust employment growth and signs of a pick-up in wages.

The ONS figures also showed the rate of Retail Prices Index (RPI) inflation fell to 1% from 1.1%.