UK inflation rate falls to record low of 0.3% in January

January’s figure is the lowest rate of CPI inflation since estimates of the measure began in 1988.

The Bank of England said last week that inflation may temporarily turn negative in the spring.

Inflation as measured by the Retail Prices Index fell to 1.1% from 1.6% the previous month, the Office for National Statistics said.

“Falling prices for motor fuels and food were the main contributors to the slowdown in the rate of inflation,” it added.

ONS statistician Phil Gooding said average petrol prices had fallen on the month, as had prices for foodstuffs such as milk and fruit, while games, toys and hobbies had also become cheaper.

He added that a slowdown in the rate of price inflation for alcohol and some recreational goods and services had also contributed to the overall slowdown.

The ONS said that while the cost of food and fuel is lower than a year ago, prices for other items, such as clothing and furniture, are rising.

“With inflation likely to fall further and earnings growth now finally trending upwards, consumers should see appreciable improvement in their purchasing power as 2015 progresses,” he said.

However, he noted that core inflation, which strips out food, energy, alcohol and tobacco prices, rose to 1.4% in January from 1.3% the month before. 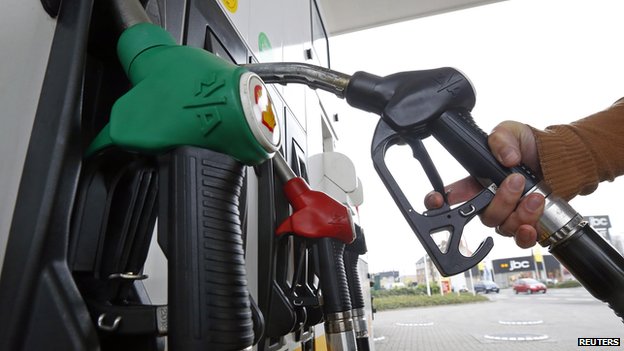 Falling oil prices have led to cheaper prices at the pump

“The rise in core inflation highlights the fact that the UK is far from suffering generalised deflation,” he said.

He added that the drop in oil prices was “sharply” lowering the price of goods bought and sold by manufacturers, which could also feed through to lower consumer prices.

“This is indisputably good news for the UK consumer,” he said.

Chancellor George Osborne tweeted that the low inflation figure was a “milestone for the economy”.

Danny Alexander, chief secretary to the Treasury, told the BBC that the figures were “good news” for the UK.

“But in Britain, wages continue to be sluggish and working people are £1,600 a year worse off under this government. A few months of falling world oil prices won’t solve the deep-seated problems in our economy”