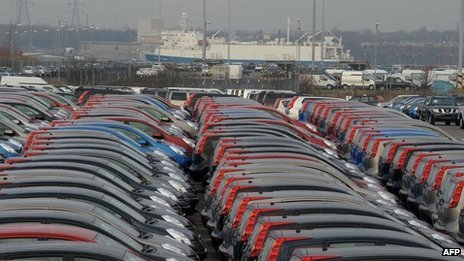 The Office for National Statistics (ONS) said the trade deficit shrank to £9.1bn from £9.4bn in January.

Economists had expected a deficit of £9.2bn.

The UK trade deficit is the measure of the difference between the value of goods the country exports compared with the value of the goods it imports.

The ONS said imports of aircraft and aircraft parts fell 46.3% in February, contributing to three quarters of the total fall in imports in the month.

Imports were also at their lowest level since April 2011.

The ONS said in the three months to the end of February, the goods trade deficit narrowed by £3bn to £26.2bn representing a fall in exports of 0.1% while imports were lower by 3.5%.

The UK’s goods trade deficit with non-EU countries narrowed sharply to £2.9bn n February from £3.9bn January, against forecasts for a gap of £3.4bn.

He added: “Looking ahead, net trade will likely struggle to make a sustained, significant positive contribution to UK growth in the near term at least as imports are likely to continue to be underpinned by decent UK domestic demand.

“Nevertheless, the hope has to be that exports will increasingly benefit from global growth gradually picking up over the coming months.”

The overall trade deficit in goods and services for February was £2.1bn, compared with a £2.2bn deficit a month earlier, thanks to the UK’s trade surplus in its dominant services sector.

Although the trade deficit fell, the drop in exports means the latest figures provide mixed news for the Chancellor George Osborne’s hopes of rebalancing the economy by boosting exports and reducing the UK’s reliance on its services sector and consumer spending.

On Tuesday, the International Monetary Fund (IMF) said exports as well as business investment in the UK were disappointing, despite raising its forecast for economic growth in the UK this year to 2.9%.

Commenting on the trade figures, David Kern, chief economist at the British Chambers of Commerce said: “Judging by present trends it will be incredibly hard to meet the Prime Minister’s export target of increasing exports to £1tn by 2020.

“The recent announcement by the chancellor that the Bank of England will make a contribution to supporting export finance is welcome, but much more needs to be done.”