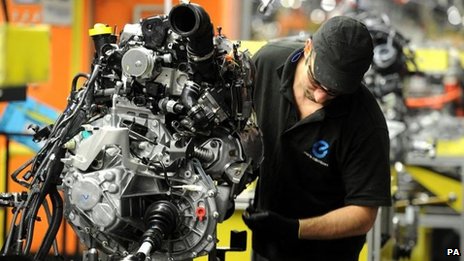 The Office for National Statistics (ONS) confirmed that the economy grew by 0.7% in the quarter, unchanged from its previous estimate.

The ONS said business investment in the fourth quarter rose 2.4% from the previous three-month period.

Business investment was also up 8.5% from a year earlier.

Other factors helping growth in the final quarter of 2013 included a 0.4% rise in household spending and a similar contribution from net trade, as the balance between imports and exports improved.

Recent business surveys have suggested that the recent upturn in the UK economy has continued into 2014.

David Kern, chief economist at the British Chambers of Commerce, said the latest ONS figures were “positive news” and would underpin business confidence.

But he added it was now “important to improve the quality of Britain’s recovery”.

“While it is encouraging that consumer spending is growing, we need to rely more on investment and net exports. These figures show a small move in the right direction, but there is still more to do.”

“Next month’s Budget must send out a powerful signal that government will continue to act on delivering a competitive business environment that will give the private sector confidence to invest,” he added.

The recent recovery in the economy has raised the question of when the Bank of England will raise rates from their current historic low of 0.5%.

Recent comments from Bank of England policymakers have indicated that rates will rise in the first half of 2015.

David Miles, member of the Bank of England’s Monetary Policy Committee (MPC), told the BBC on Wednesday that interest rates would not rise in the next few months, adding the MPC was “not in a hurry” put rates up.

He said: “It may be that sometime next year might be the right time [to raise interest rates]. It is difficult to predict in advance.”

The rise would be very gradual, when it did occur, he said.

After the recent experience of falling real wages, Mr Miles said that as the economy continued to recover, wages would rise faster than inflation.

“It has been an extraordinary period, an extremely painful period, which has lasted five years, with people’s incomes falling,” he said.