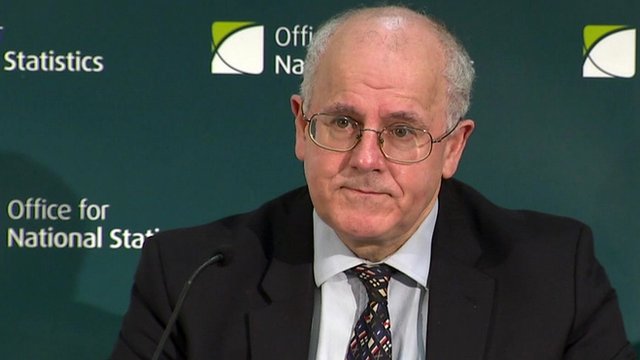 But gross domestic product (GDP) for the fourth quarter fell to 0.7%, down from 0.8% in the previous quarter, it said.

And economic output is still 1.3% below its 2008 first quarter level,

“We’ve seen growth in most parts of the economy,” said Joe Grice, chief economist at the ONS.

Responding to the figures, Chancellor George Osborne said: “These numbers are a boost for the economic security of hard-working people. It is more evidence that our long-term economic plan is working.

Just maybe – whisper it very quietly indeed – come the end of the year a majority of us will begin to feel the benefits of the recovery in our pockets, in living standards that may start to rise again.”

“But, for working people facing a cost-of-living crisis, this is still no recovery at all.”

The UK’s service sector – which makes up more than three-quarters of economic output – rose by 0.8% in the fourth quarter, the ONS said, matching its performance in the previous quarter. And the manufacturing sector grew 0.9%.

But industrial production fell slightly from 0.8% to 0.7%, dragged down by falling North Sea oil and gas output.

Construction – which accounts for less than 8% of gross domestic product (GDP) – fell by 0.3% in the quarter, despite the recent recovery in a housing market boosted by the government’s Help to Buy scheme.

Many headlines can be drawn from these figures – the fastest annual growth since 2007 and the first unbroken year of expansion since then are the obvious ones.

And yet … fourth quarter growth was slower than in the previous quarter and the economy is still 1.3% below the pre-recession peak. Much of the growth contribution between October and December came from the high-flying services sector.

Construction saw a downturn after two quarters of expansion. Sceptics will continue to argue that the recovery could be more balanced – Vince Cable has suggested as much. But the UK was one of the fastest growing economies in the G7 last year and is predicted by the IMF to be a leading performer in 2014, behind only the US.

Job creation has proved to be a lot faster than expected. Few will doubt that the outlook seems fair and a lot better than a year ago.

John Longworth, director general of the British Chambers of Commerce, said: “These growth figures confirm what we’ve been hearing for some time.

“Businesses across Britain are growing ever more bullish about their prospects. Our surveys now consistently show business confidence levels not seen for decades.”

In December, the independent Office for Budget Responsibility revised its 2013 UK growth forecast from 0.6% to 1.4%.

It is currently forecasting growth of 2.4% for 2014, but if the economy continues recovering at its current pace, the OBR’s revised forecast may also have to be revised.

The International Monetary Fund (IMF) also increased its growth forecast for the UK economy from 1.9% to 2.4%.

“Consequently, we believe that the economy can post GDP growth of 3% this year.”

The ONS figures are themselves preliminary estimates, based on early submissions and are subject to revision.

Stronger GDP growth is leading to speculation that the Bank of England may be forced to raise its base interest rate – currently 0.5% – sooner than it had expected.

But governor Mark Carney has said the rate is unlikely to rise any time soon, despite the sharp drop in UK unemployment last week to a rate of 7.1%, close to the level at which it had said it would consider cutting interest rates.

Last week, however, the Bank said it would no longer use employment as a prompt for rate setting, but a wider range of measures.

Inflation has fallen to the Bank’s target rate of 2%.