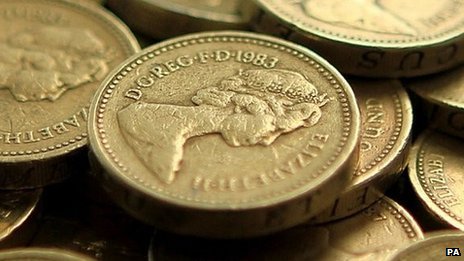 The IMF says that UK monetary policy “should stay accommodative”

The International Monetary Fund (IMF) says the UK economy will be the fastest-growing in the G7 this year.

But it sees risks in emerging markets and warns of low inflation in advanced economies and geopolitical issues.

This is a relatively upbeat forecast for the world and for the UK in particular.

For the UK, it is yet another substantial upgrade to the IMF’s assessment of the outlook. Only 12 months ago, the IMF forecast 1.5% growth for this year.

If the new figure of 2.9% turns out to be right, the UK will be the fastest-growing economy in the G7 major developed nations this year.

The global forecast also sees things getting better. Next year’s figure would be just about the same as the average for the 10 years before the financial crisis.

Inevitably there are risks, however, including possible economic fallout from the political crisis in Ukraine.

The IMF also warns about the potential for excessively low inflation – yes, really.

Falling prices or deflation can be very damaging. So far, it is not affecting very many countries. But it is a potentially threatening cloud on the economic horizon.

The predictions come in the IMF’s latest World Economic Outlook, its bi-annual analysis and projections of economic developments.

Last week, the IMF’s head warned that the global economy could be heading for years of “sub-par growth”.

Christine Lagarde warned that without “brave action”, the world could fall into a “low growth trap”.

She said the global economy would grow by more than 3% this year and next, but that market volatility and tensions in Ukraine posed risks.

The IMF says that growth has rebounded more strongly than anticipated in the UK on the back of easier credit conditions and increased confidence.

But it cautions that the recovery has been unbalanced, with business investment and exports still disappointing.

For instance, an external shock involving further growth disappointment in emerging market economies could spill over to the euro area, it says.

That, in turn, could spread to the UK through “financial linkages”.

“In the United Kingdom, monetary policy should stay accommodative, and recent modifications by the Bank of England to the forward-guidance framework are therefore welcome,” the report added.

“Similarly, the government’s efforts to raise capital spending while staying within the medium-term fiscal envelope should help bolster recovery and long-term growth.”

In January, the IMF said it was increasing its UK growth forecast for 2014, from a previous 1.9%, to 2.4%. That figure has now been raised again.

Responding to the 2.9% growth prediction, a Treasury spokesman said it was “further evidence that the government’s long-term economic plan is working”.

And they said the next stage in creating “a more resilient economy” was through “support to businesses, savers and exporters”.

Earlier on Tuesday, there was further indication of UK growth, with the release of manufacturing and industrial production figures.

UK manufacturing output grew by 1% in February from January, the Office for National Statistics (ONS) has said.

The rise – driven by pharmaceuticals, transport equipment, food, beverages and tobacco – was the biggest since September, and ahead of forecasts.

Industrial output, which includes power generation and North Sea oil production as well as manufacturing, climbed 0.9% on the month.