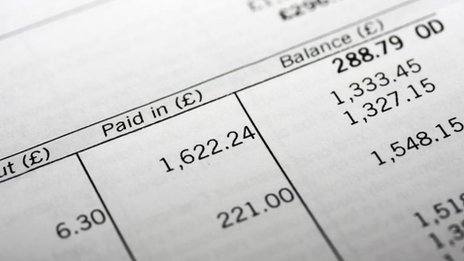 Various safeguards are aimed at preventing bank accounts from being emptied

An estimated 17,000 people a year will have their accounts raided for unpaid tax under new rules, according to the UK tax authority.

In the Budget, Chancellor George Osborne outlined plans for new powers to recover tax debts from anyone who owes more than £1,000.

Now HM Revenue and Customs (HMRC) has explained how the system will work.

An accountancy body which previously described the powers as “draconian” said limits to the rules were “robust”.

The tax authority said that the average debt of those likely to be targeted was £5,800. It added that in a half of cases, debtors had more than £20,000 in their accounts.

The new powers would allow HMRC to seize money owed in tax, or owed as a result of tax credit overpayments. HMRC would be able to take the money from bank accounts, building society accounts, and Individual Savings Accounts (Isas).

After the Budget, ACCA accountancy body described the plans as “seriously draconian” but now call them as “less fearsome than first thought”.

“On paper, the safeguards look relatively robust, and the reality is it is unlikely that anyone will be left penniless. The fact that there will be plenty of opportunity for those owing taxes to respond to HMRC and appeal before any funds are taken,” said Chas Roy-Chowdhury, head of taxation at the ACCA.

“There remain some concerns over how efficient HMRC can be in maintaining those safeguards, as well as whether this initiative is in fact a toothless one that will make no difference at all to collecting taxes owed. However, it is important now to have constructive engagement with HMRC to ensure the proposals are reasonable and proportionate.”

David Gauke, a Treasury minister, said that people should pay the tax they owe, on time.

“Providing HMRC with the powers to directly recover tax debts will reduce the debt owed to HMRC in the most effective way so that the government can continue to fund vital public services,” he said.

But the Low Incomes Tax Reform Group has called on HMRC to give more concrete assurances about the right to appeal against any seizure.

The plans are now going through the consultation process. If approved by Parliament, they will take effect in 2015-16.