Primary pupils to learn about world of work 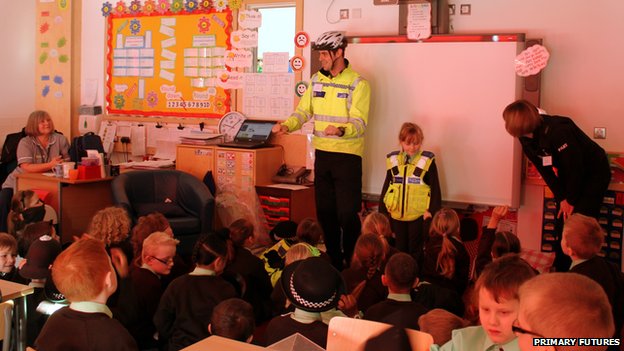 A workers’ army is being recruited to explain to primary pupils how lessons relate to their future careers.

The scheme aims to send up to 100,000 people, “from apprentices to chief executives”, into schools in England to talk about their jobs.

Primary Futures, developed by the head teachers’ union NAHT, has already run a series of pilots across England.

“It is not about specific careers advice, or fixing on one path for the future at age 11.

“Children benefit from understanding the practical requirements of the working world so they can be motivated to improve their literacy and numeracy,” said Mr Hobby.

One of the first pilots was run at Athersley South Primary in Barnsley with a senior female paramedic.

Head teacher Steve Iredale who is also the NAHT’s retiring president, said: “The children could see a real link as she highlighted the importance of writing patient notes neatly to avoid the threat to someone’s safety caused by illegible case notes.”

One pupil, Lewis, said: “I learned lots more about the role of a paramedic and how my learning is so important. It was an exciting afternoon.”

The scheme is an extension of the Inspiring the Future programme, set up five years ago by the charity Education and Employers Taskforce to send workplace speakers into secondary schools.

So far 13,500 volunteers are registered to visit three-quarters of secondary schools in England.

Nick Chambers, the charity’s director, said: “Primary Futures grew out of discussions with NAHT about how best employers could support primary schools.

“Head teachers were keen to invite volunteers from outside their immediate communities to give children the chance to meet people from a range of professional backgrounds but found it difficult and time-consuming.”

Mr Chambers said the new scheme should make it easier both for schools to access volunteers and for people to volunteer.

The charity wants volunteers to pledge an hour a year to talk to children at a local state school about their jobs, their backgrounds and cultures and the routes they took into their careers.

While at the school they might read with small groups or individuals, take part in a numeracy activity or even act as judges in projects and competitions.

Ultimately the scheme will be extended across the UK, says the charity.