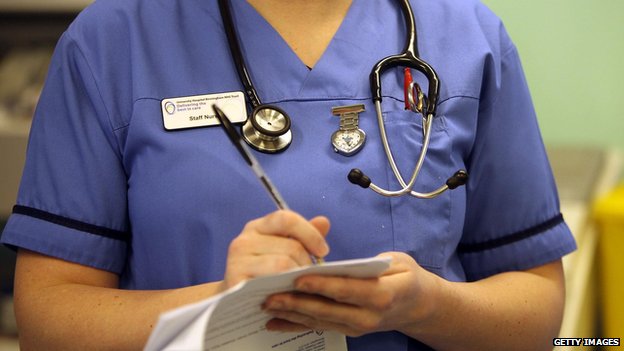 There is a “real sense of anger” among nurses in England about an “unfair” pay offer, nurse leaders are warning.

He even said he could not rule out calls for industrial action.

In March, the Department of Health said staff entitled to progression-in-the-job increases would not get the rise.

The automatic increases are designed to reward professional development. They are given to half of all NHS staff and are worth more than 3% on average.

But the government rejected recommendations from the independent pay review body for the across-the-board rise to be given to all staff in 2014-15.

Health Secretary Jeremy Hunt said implementing the pay body’s recommendations would be “unaffordable and would risk the quality of patient care” as nursing jobs would have to be cut if everyone in the NHS got the 1% rise.

In contrast, the Scottish Government has accepted the 1% recommendation. Talks are on-going in Wales and Northern Ireland.

So far the RCN has not called for industrial action, unlike Unison and Unite which have both balloted members.

But Mr Carter said he could not rule out emergency motions at the four-day conference which gets under way in Liverpool later.

He told the BBC pay would be a “topic of hot discussion”.

He said the anger was fuelled by what appeared to be a growing pay bill for senior NHS managers.

Data obtained under the Freedom of Information Act by the RCN shows that the amount spent on executive directors, who sit on the boards of NHS trusts, has grown by an average of 6.1% in the last two years compared to the 1.6% extra nurses, health visitors and midwives have got.

However, the executive director figures also include termination payments so it could be a sign of the NHS getting rid of senior staff.

Nonetheless, Mr Carter added the findings were a “kick in the teeth” for nurses.

“Failing to pay nursing staff a decent wage will continue to affect nurses’ living standards and morale and cause many more to consider leaving the NHS,” he said.

“The government should do the decent and honourable thing and give nurses a decent wage.”

A spokeswoman for the Department of Health said the figures on executive pay should be “treated with caution” as other data suggested there had been no increase.

She added: “We have an available budget of nearly £1bn for pay increases. We have offered to look at any proposal the unions make on how to use this money.

“However, they have not put forward any proposals to help the lowest paid. Our door remains open if they wish to reconsider their position.”