Labour would guarantee apprenticeships for every school leaver in England who “gets the grades” by 2020, Ed Miliband has said.

The pledge comes as Mr Miliband set out his party’s business policies for the general election.

He argued better training and higher wages were key to boosting productivity.

He said: “Gordon Brown already made exactly the same promise when he was in power and then they failed to deliver it. And secondly we actually have already doubled apprenticeships during this parliament.

“We’ve said in the next parliament if the Conservatives are re-elected, we will put three million people onto apprenticeships, that’s a massive increase.”

But Labour claim the Tory plan does not offer high enough quality training and in many cases consisted of “rebadged” internal training schemes.

Labour are talking about an extra 80,000 apprenticeships, with 33,000 to come from one project alone – the HS2 rail line.

The party’s “guarantee” would only apply to young people who gain ‘”level 3 qualifications,” which are equivalent to having two A Levels.

Those with two A levels would also qualify but not those who have GCSEs only. 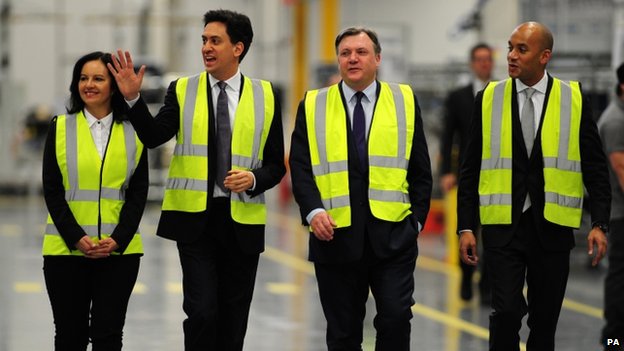 The policy would be paid for by private companies bidding for public sector contracts. who would be required to have two year apprenticeships, and by diverting money from in-house training to “proper apprenticeships”.

Money will be devoted to apprenticeships from funds earmarked for Labour’s Jobs Guarantee for young people who are unemployed for a year, which will be funded by a bank bonus levy.

In a speech to workers at the Jaguar Land Rover factory in Wolverhampton, Mr Miliband said: “It is time to match the aspirations of our young people with the high quality apprenticeships they deserve.

Setting out his vision of a “more inclusive prosperity,” Mr Miliband said the key to boosting productivity is rewarding hard work for those on low and middle incomes.

He repeated pledges to offer tax breaks to employers who adopt the living wage and raise the minimum wage closer to average earnings – £8 an hour – by 2020.

Mr Miliband also argued that there is a choice between “two plans at this election”, and said: “A failing plan under which we would carry on as we are with a government claiming the economy is a success when it only works for a handful of people at the top.

“Or a new plan, a better plan, that says this economy must succeed for working families if Britain as a whole is going to succeed.

The strategy, which is understood to be based US President Barack Obama’s campaign to grow the economy was “from the middle out, not from the top down”, was backed by former business secretary Lord Mandelson in an article for The Guardian. 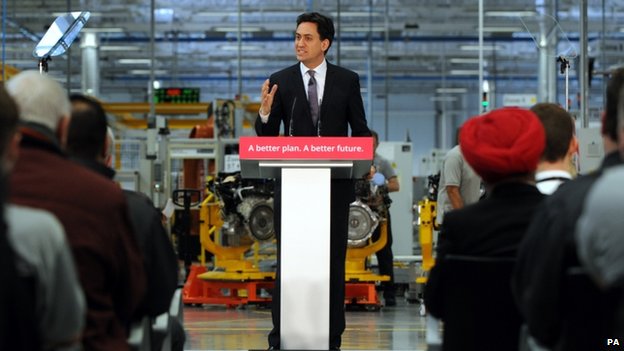 But Mr Miliband’s speech came under fire from his political rivals.

SNP Treasury spokesman and deputy leader Stewart Hosie said: “If Labour were serious about economic recovery they would support the SNP’s alternative to austerity- rather than hitting the most vulnerable people in society the hardest with cuts to public spending.”

UKIP said the Labour leader could only come up with “inoffensive platitudes”.

The party’s economics spokesman, Patrick O’Flynn, said: “Every party and politician would like a Britain of higher skills, higher productivity, higher added value jobs and higher wages, but Mr Miliband patently has no idea how to bring this about.”

Meanwhile, Business Secretary Vince Cable conceded that apprenticeships for 16 to 19-year-olds had decreased under the current government, but insisted that more advanced apprenticeships which employers valued more had been created.

Mr Cable described the coalition’s apprenticeship policy as a “great success story” that has “breathed life back into” vocational education.

John Longworth, director general of the British Chambers of Commerce, said: “Mr Miliband is right to focus on the importance of high quality apprenticeships, and collectively we can work harder to deliver more of them. We also favour giving employers more control over funding, so that companies can train apprentices with the skills to suit their needs.

Christian May, head of campaigns at the Institute of Directors (IoD), said he perceived an “important change in tone from Ed Miliband and one which will be welcomed by the business community”.

But he added: “It is hard to square this new-found enthusiasm for wealth creation with Labour’s commitment to reintroducing the inefficient 50p rate of tax.”

Labour has also been accused of failing to understand small business after shadow chancellor Ed Balls said people should seek a receipt for every cash job by a cleaner or handyman.

He told BBC Radio 5’s Pienaar’s Politics he always demanded a written record, even if it was merely for £10 to trim a hedge, because it was the “right thing to do”.

Mr Miliband attempted to shrug off the row, saying: “What’s important is that people pay their fair share in taxes.”

On Labour’s policy towards tax avoidance, he said: “Hedge funds are more important than hedge cutters.”