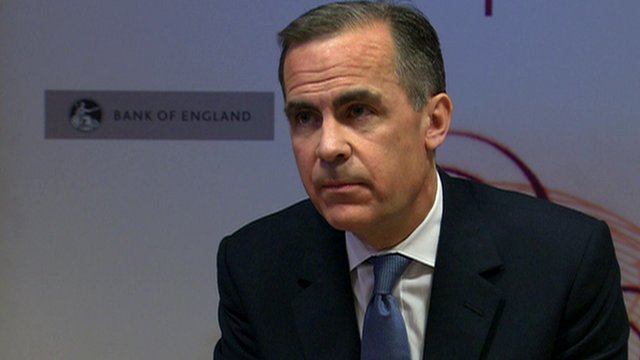 He said the Bank’s forward guidance policy “is working” and had helped to secure growth.

The Bank’s rate policy will now be determined not just by unemployment, but by a wider range of indicators.

But Mr Carney warned the recovery was not secure and that when rates rose, they would do so only “gradually”.

August seems a long time ago. Then forward guidance on interest rates was linked firmly to the rate of unemployment. Today with the jobless rate nearly at the Bank’s 7% chosen threshold, the Bank has been obliged to launch forward guidance Mark 2.

No longer will there be a single indicator. The Bank’s governor, Mark Carney, said a range of economic variables would be considered, including the output gap (the gap between potential and actual output). He gave a strong hint that rates would rise only gradually to reach 2% by 2017.

The problem for the Bank is that what seemed clear last August is now rather more complicated. Households and businesses may be scratching their heads.

However, investors took this as an indication that rates could rise next year, sending the pound higher on the money markets.

Introducing the Bank’s forward guidance policy last August, Mr Carney said that the Bank would not consider raising interest rates from their current low of 0.5% until unemployment had fallen to 7% or below.

He said the policy had reduced uncertainty and encouraged businesses to hire and spend.

“Forward guidance is working – expected interest rates have remained low even as the economy has recovered strongly, uncertainty about interest rates has fallen, and most importantly, UK businesses have understood the message,” the governor said.

But he said the policy needed to be revisited “as a result of exceptionally strong jobs growth”.

“The unemployment rate has fallen much faster than anticipated… and is likely to reach 7% by the spring,” he said.

The Bank’s inflation report said that the “Bank rate may need to remain at low levels for some time to come”.

“Forward guidance has clearly been effective in influencing companies’ expectations of when interest rates will rise and in cementing their confidence in the recovery,” said Katja Hall, chief policy director of the CBI business group.

“The Bank’s new guidance will give businesses further peace of mind that interest rates will stay low for some time, until investment and incomes are growing at sustainable rates.”

Outlining the Bank’s revised forward guidance policy, the governor said the Bank would now be looking at a wider range of indicators, including wages, productivity and spare capacity within the economy.

“We have taken stock,” he said. “We’re still looking to maintain the momentum of the recovery, but we have to make more nuanced judgements.”

The Bank will be producing forecasts on a range of indicators, and these will be based on market expectations of 2% interest rates by 2017 and a first rise in spring next year.

“On the basis of the economy following the Bank’s expected path, the first rate increase is now pencilled in for the spring of 2015,” said Chris Williamson, chief economist at Markit.

“Rates are then projected to rise to 2% by early 2017. Beyond 2017, the message from the Bank is that ‘even when the economy has returned to normal… the appropriate level of Bank rate is likely to be materially below the 5% level set on average by the [Bank] prior to the crisis'”.

While highlighting the UK’s improved economic performance, Mr Carney said there was still a great deal of work to do to secure the recovery.

“Households are saving less and spending more and business investment is likely to gather pace this year,” he said.

As a result of this improved outlook, the Bank has increased its forecast for growth this year for the UK economy to 3.4% from 2.8%.

However, Mr Carney also warned that the recovery was “neither balanced nor sustainable”, and highlighted the fact that economic activity was still below pre-financial crisis levels. He added that productivity growth had been disappointing.

“A few quarters of above trend growth driven by household spending are a good start but they aren’t sufficient for sustained momentum,” he said.