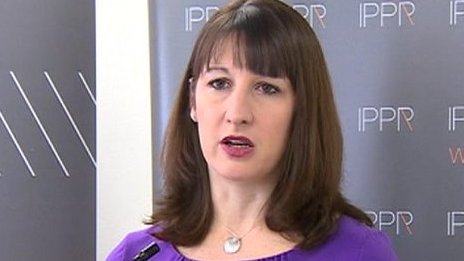 Rachel Reeves says almost 250,000 people will benefit from the policy

Labour has only committed to fund a policy that it describes as the “centrepiece and foundation stone” of its economic plan for a single year.

The party has vowed to guarantee jobs for the long-term unemployed if it wins the election next year.

Labour recently called this “a backstop for our social security system”.

But a House of Commons analysis of the scheme’s impact, seen by the BBC, was commissioned on the basis it would run for just a year.

Shadow Work and Pensions Secretary Rachel Reeves confirmed to the BBC that, under Labour’s current plans, the funding would only be in place for the first year of a Labour government.

“That’s a huge number of people, almost a quarter of a million, who would be benefiting from this policy.”

The policy would be funded by repeating the tax on bankers’ bonuses, and a restriction on pension tax relief for those on the highest incomes.

Labour is expected to make more announcements on helping the long-term unemployed soon.

But it is not clear whether it will commit to extending the “jobs guarantee” before the general election.

Last month, Ms Reeves said: “This is why the centrepiece and foundation stone of Labour’s economic plan is a compulsory jobs guarantee for young people and the long-term unemployed.”

In the past, shadow chancellor Ed Balls has described how the policy would develop “over time”.

Tony Wilson, who as a civil servant ran a similar policy initiative when Labour was in government, said he hoped the party would give serious consideration to a jobs guarantee that lasted for a whole Parliament.

Work and Pensions Secretary Iain Duncan Smith said: “Ed Miliband promised all his policies would be ‘fully funded’. But now we learn that one of his flagship policies is a short-term gimmick with sums that don’t add up.