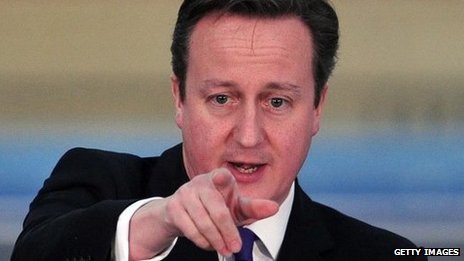 David Cameron has suggested that further public spending savings could be used to fund tax cuts.

“Every efficiency” found could help to provide a “bit of extra cash” for households, he said in a speech.

He also argued that spending cuts were part of an attempt to change the UK’s “values” by making the country less reliant on debt.

But Labour said the PM had overseen tax cuts for the wealthiest while “everyone else is worse off”.

Meanwhile, Deputy PM Nick Clegg suggested that the Conservatives had agreed to raise the threshold at which people start paying income tax further to £10,500.

“I’m delighted everybody is now scrambling to share authorship of a Lib Dem idea,” he said, criticising his coalition partners for being “spectacularly inconsistent” on the proposal and showing their “brass neck” by backing it now.

The prime minister’s speech comes two weeks before Chancellor George Osborne unveils his Budget, with the level of public spending shaping up to be a main battleground at the next general election.

The coalition parties – the Conservatives and Liberal Democrats – say cuts are vital to reinvigorate the economy, but Labour says they have been imposed too fast and have delayed the economic recovery.

David Cameron has revealed his true values by the choices he has made. He’s chosen to give the top 1% of earners a £3bn tax cut while everyone else is worse off”

Addressing an audience in the Midlands, Mr Cameron said government efficiency was “important at the best of times but it’s more important than ever when families are feeling the squeeze.

“Because every bit of government waste we can cut, every efficiency we can achieve is money we can give back to you. A bit of extra cash that can help a dad afford those trainers for his son or help a mum celebrate her daughter’s birthday with a meal out.”

He added: “There’s something even more fundamental here about our values. If we don’t get to grips with the deficit now we are passing a greater and greater burden of debt to our children.

“It’s not just what we are doing that matters; it’s why. It’s all about values. And the most important value right now – after a difficult time for our country – is giving people a sense of economic security and peace of mind.”

Mr Cameron, who has made clear that he wants to reduce taxes if the Conservatives win a parliamentary majority at the 2015 election, said true security came from “having more money in our pockets”.

Some senior Conservatives are calling for the 40% income tax rate threshold to be raised to £44,000 in the Budget to ease the burden on middle-class voters.

The prime minister’s speech comes after official figures confirmed last week that the UK’s GDP had risen by 0.7% in the final three months of last year.

“I’ve been saying the same thing for well over half a decade now, which is that we need to target all our tax cuts at those on low and middle incomes by raising the [income tax] allowance,” Mr Clegg told journalists.

“My coalition partners, by contrast, have been spectacularly inconsistent.

“So they’ve got a fair amount of brass neck to claim that somehow now all they ever wanted all along was to see the allowance go up. Because that’s not what they said in public, and crucially it’s not actually what they said in private either.

“I’ve had to drag the Conservative Party kicking and screaming in every single Budget negotiation, by the way not least recently, when I talked about wanting to see this extra workers’ bonus.”

For Labour, shadow chief secretary to the Treasury Chris Leslie said: “David Cameron has revealed his true values by the choices he has made.

“He’s chosen to give the top 1% of earners a £3bn tax cut while everyone else is worse off.

“Working people have seen their wages fall in real terms by over £1,600 a year on average under David Cameron’s government.”