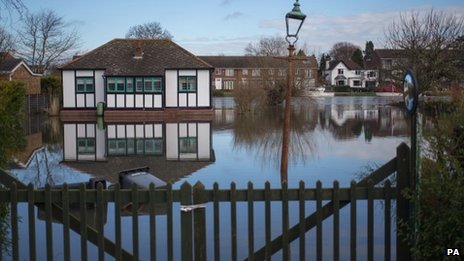 The flood waters could take six weeks to recede, according to experts

Anyone forced to leave their home because of the floods will not have to pay, Downing Street has confirmed.

The government has set aside £4m to fund local authorities to cover the cost of unpaid council taxes.

About 6,500 homes have been flooded since December and the prime minister has said “money is no object” to support the clean-up operation.

Meanwhile, Network Rail has announced that the line at Dawlish in Devon, damaged by recent storms, is unlikely to be completely repaired until mid-April.

Following the recent floods in several parts of the UK, some local authorities have announced plans to exempt residents forced out of their homes from part or all of their council tax bill.

Somerset County Council has already announced plans to suspend the county council part of the tax for residents affected by the flooding and Aylesbury Vale District Council in south Buckinghamshire said households can apply for a 100% reduction in the fee.

Mr Cameron said those councils that helped people in this way would be compensated.

He wrote on Twitter: “I can confirm we will fund councils that give council tax rebates to people whose homes have been flooded.” 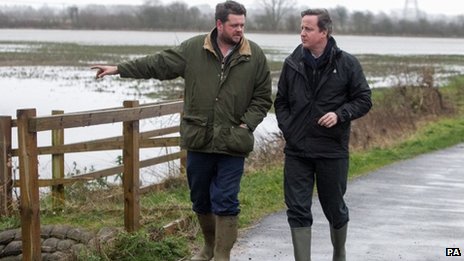 David Cameron is touring flood-hit areas of the UK 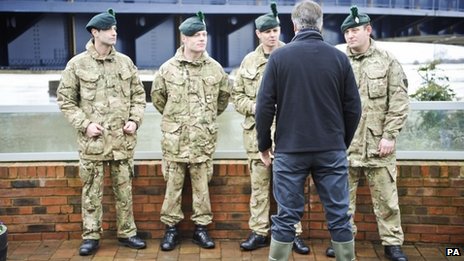 The prime minister, who visited flood-hit communities in Pembrokeshire and Somerset, has said every resource will be made available to protect people and homes still at risk and support the relief effort.

Speaking in Somerset, he promised a “vast national effort helped and co-ordinated by the British government” to support those affected.

“It’s a good example of acting quickly to reassure people about something that frankly ought to happen anyway and to reassure them.”

Some 84 flood warnings remain in place across England and Wales alongside two severe flood warnings – meaning there is a danger to life – on the Somerset Levels.

The prime minister warned those affected that it would take many weeks for the flood waters to recede.

“The advice I have is this will take six weeks to clear,” he said.

Labour said the government had been “off the pace” in their response and the details of the council tax rebate scheme should be published as soon as possible.

It said that a change in the regulations in 2012, which meant those whose homes are empty for six months or undergoing repairs for a year are no longer automatically eligible for council tax exemptions, should be reversed.

“The government needs to reassure residents that they will work with local authorities to ensure flood victims are not paying council taxes on properties needing substantial repairs,” said shadow communities secretary Hilary Benn.

Ministers have already pledged extra funding for councils for flood repairs under the terms of the Bellwin scheme, which provides emergency financial assistance to local authorities.

Have you been affected by the recent floods? Do you have any questions about flooding insurance? We will be putting some of your questions to an expert. Email us at haveyoursay@bbc.co.uk with the subject heading ‘Floods’. At no time should you endanger yourself or others, take any unnecessary risks or infringe any laws.