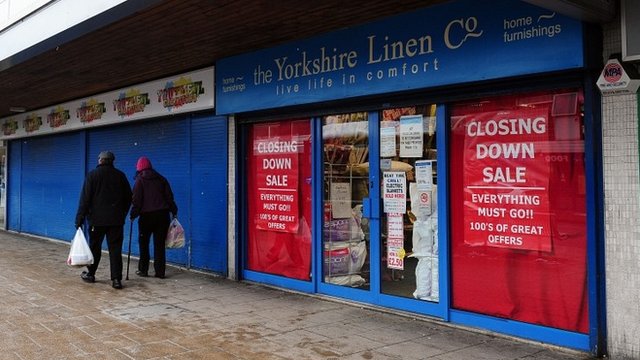 The current system of business rates is in need of “fundamental reforms” in order to help retailers and boost local economies, a group of MPs has said.

A report from the Business, Innovation and Skills Committee says the property tax is no longer fit for purpose, and calls for a “wholesale review”.

The committee’s views echo those of several leading business figures.

Last week, former Tesco boss Sir Terry Leahy described it as an “ancient tax” that “has not worked for years”.

Business rates are charged to retailers based on the value of their shop or other commercial property.

In its report, the Business Committee said there should be an examination of whether retail taxes should instead be based on the value of sales.

This could mean lower rates for smaller High Street shops.

It also suggests a separate system of business taxation for the retail sector.

“Among the many challenges they face, business rates are the single biggest threat to the survival of retail businesses on the High Street,” said committee chairman Adrian Bailey.

“Since the system was created the retail environment has changed beyond all recognition. A system of business taxation based on physical property is simply no longer appropriate in an increasingly online retail world.”

“This report must be the final nail in the coffin of the question: do business rates need to be reformed?” said director general Helen Dickinson.

“They do. Business thinks so. A committee of Parliament thinks so. We very much hope the government will think so too.”

Reform must be fair

But Adam Marshall, director of policy at the British Chambers of Commerce, pointed out that business rates affect all types of businesses, not just retail, and reform across all sectors was needed.

“We need thriving High Streets, but business rates are also the reasons many manufacturers and services companies put off investment and hiring decision because their rates bills are just too high,” he said.

And Mark Rigby, chief executive of CVS and chairman of London Wasps told the BBC’s Wake up to Money programme, that the current system isn’t all bad, and that any alternative would need to be fair to all businesses, not just the retail sector.

“The reason it’s based on property is because it works. You have to accept that business rates is a zero sum game. The government is looking to collect £25bn. If retail reduces the amount it pays, someone else will be paying more.”

A government spokesperson said it was currently reviewing business rates administration “which will look at longer-term reforms to make the system more transparent, efficient and responsive to economic circumstances”.