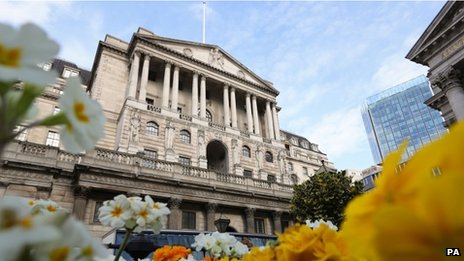 The members of the Monetary Policy Committee voted unanimously to hold interest rates at 0.5%

Bank of England policymakers have suggested an interest rate rise this year is more likely than expected.

The minutes of the latest meeting of the Monetary Policy Committee (MPC) showed its members were “surprised” to see markets did not expect an interest rate rise this year.

The minutes come a day after official figures showed inflation fell to 1.5% in the year to May.

Bank policymakers see economic growth slowing in the second half of the year.

They also believe there is still about 1% to 1.5% “spare capacity” in the economy, suggesting it is still not expanding by as much as it could because of underinvestment by businesses.

But as economic confidence returns, policymakers warned that spare capacity could disappear, adding to inflationary pressures and strengthening the case for an interest rate rise.

At the time of the latest MPC meeting on 4 and 5 June, analysts were expecting rates to rise in the first half of next year, with only a 15% chance of it taking place by the end of 2014.

But several economists have shifted their interest rate forecasts since the governor of the Bank of England, Mark Carney, hinted during his annual Mansion House speech to business leaders that an interest rate rise “could happen sooner than markets currently expect”.

Howard Archer, chief UK and European economist at IHS Global Insight, said he now expected an increase in interest rates to 0.75% “by the end of 2014”.

The minutes showed the nine committee members voted unanimously to maintain interest rates at 0.5%, despite speculation that some might have voted for a hike this month.

But the minutes also showed: “For some members, the policy decision had become more balanced in the past couple of months than earlier in the year.”